The CellSearch system is the only clinically validated, FDA-cleared blood test for enumerating circulating tumor cells (CTCs). The system concentrates CTC from whole blood transfers the concentrated CTCs to a CellSearch cartridge. Next immunofluorescence images are acquired and a CTC is identified on the presence on DNA, Cytokeratin and negative for the leukocyte marker CD45 (http://www.siliconbiosystems.com). VyCAP’s Puncher system for isolation of single cells is fully compatible with the CellSearch system to isolate single CTC that have enriched and enumerated by the CellSearch system. 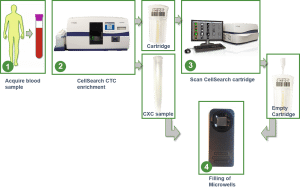 Next the microwell chip is scanned on VyCAP’s Puncher system and CTC are isolated for DNA analysis. Image below presents fluorescence images of CTC in VyCAP’s microwells that have been transferred from a CellSearch cartridge into the microwell chip.

Today we have succesfully transferred and isolated CTC from CellSearch cartridges that were up to two years old. The table below displays the number of initial CTC found at the customers site, the number of days between this scan and the time we isolated the CTC and the number of CTC we have isolated.