Metastasis is the major cause of death in patients diagnosed with invasive cancer. To improve the treatment a fundamental understanding of cancer is needed. Therefore state of the art research groups currently use patient originated organoids to study cellular phenomena. These studies improve the understanding of cancer treatment and therapy resistance.

Cancer organoid cultures are currenlty used as model system and can be established from most cancer types.These model systems enable researchers to study different tumor subtypes, cancer stages and mutational landscapes in a patient population.

To map the cell heterogeneity VyCAP’s single cell technology is used by the Hubrecht Institute. This is a worldleading research institute specialized in cancer. A team of researchers isolate and analyse single cells after organoid dissociation. Single cells in the cell suspension are sorted in the microwell chip and isolated with the Puncher system for downstream analysis (DNA & RNA). This opens new ways to understand cancer.

To isolate cells a cell suspension has to be created. Last two years protocols are developed to dissociate small organoids (10-1000cells). The number of pores in the microwell chip is such that the whole cell suspension (0.1-40ml) can be filtered at once. To trap all cells a microwell chip with a pore diameter of 2000nm is used. It is expected that the extensive work will be published in the third quarter of 2018 in a high impact journal. Below some examples are given of work done with organoids (unpublished data). Contact us for more details.

Example of organoids in chips

To generate organoids, cells are tradionally suspended in 100% BME to provide a 3D micro-environment and structures. In below example colorectal cancer (CRC) cells are cultured in 0%, 2%, 10% and 20% BME. Cells are mixed with different BME concentrations and seeded in microfluidic wells. Images are taken at different time points with the imaging system to follow the development. Images at day 1 show single CRC cells in the microwell. For all investigated conditions CRC cells formed intestinal tumor organoids within 3 days. During growth cells arranged into a spherical formation and this morphology was stable up to 10 days.

Example of organoids evolution during 2 weeks

Directly after seeding, single cells displayed dim GFP signal. During growth, GFP signal increased indicating an increase in cell number. GFP expression showed that cells arranged in a nested pattern, with highly active cells at the periphery. At day 9 the majority have an average diameter between 50 and 60 µm and occupied the complete microwell surface area as depicted in the images. These images are made on the VyCAP imaging system. Focusing on organoid morphology, a lumen formed de novo and expanded within the cell aggregates starting on day 6 (see also red arrows below). The morphology closely resembles that of CRC organoid cultured in a tissue culture plate. 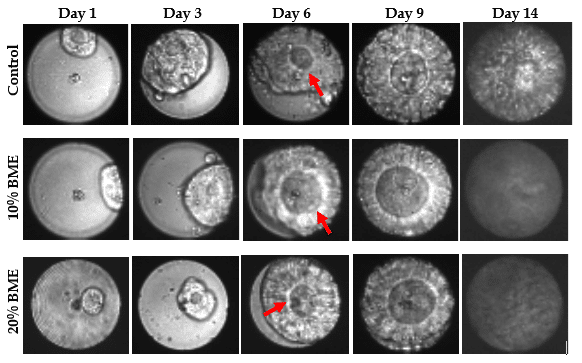 Apart from the effect on morphology BME also has an inducing effect on organoid growth efficiency. For the control group only 10% of the single cells generate organoids. An increase in growth efficiency was observed for organoids cultured in the presence of BME. The highest efficiency is found for cells grown in 20% BME. At this BME concentration, 28% of the single cells proliferate and generate organoids. For 2% and 10% BME the growth efficiencies are 13% and 20% . Single CRC cells grown without BME display the lowest growth efficiency. For microwells with pairs (2 cells per well) or triplets (≥ 3 cells per well) growth efficiency increases significantly. This is observed in all conditions with or without BME addition. However, cultures in 20% BME show by far the highest percentage of organoid formation from pairs and triplets (65% and 80% respectively).