VyCAP offers solutions to enumerate  CTC in mouse blood, which enables researchers to improve and expand their research. Mouse xenograft models are used to study tumour evolution and the efficacy of anti-cancer therapeutics. CTC in mouse contain detailed information about the cancer development.

Enumerate and analyse CTC in mouse

Enumerate CTC easily and reliably with limited hands-on time is established by using size based filtration. Circulting tumor cells are filtered from the blood by their larger size and higher rigidity compared to other blood cells.

The workflow to filter whole blood from mouse is validated, automated and simple. It takes less than 1 hr to process and enumerate circulating tumor cells.  The mice blood is collected  using an EDTA or heparine tube, from the mandibular vein or hart puncture (0,1 – 1 ml). Next, the blood is  pre-filtered with a nylon filter (30µm mesh size)  to remove larger clots, mouse hairs / debris.

Recovery data of CTC in mouse

The image below depicts a mouse CTC cluster captured on a VyCAP sieve, as well as some leukocytes.

Mice were engraftment with the PANC-1 cancer cell lines and the cancer tumor evolution was studied over time. CTC were enumerated at the end point, in 100µl blood obtained by heart puncture, that was next fixated using Transfix.  Blood was filtered and labelled with fluorescence labels against anti-human Cytokeratin and anti-mouse CD45.2, according our protocol for CTC enumeration in mice. The image below shows an image of mouse leukocytes and a human PANC-1 CTC cluster on a microsieve. Number of CTC found in these mice was between 10 and > 800. 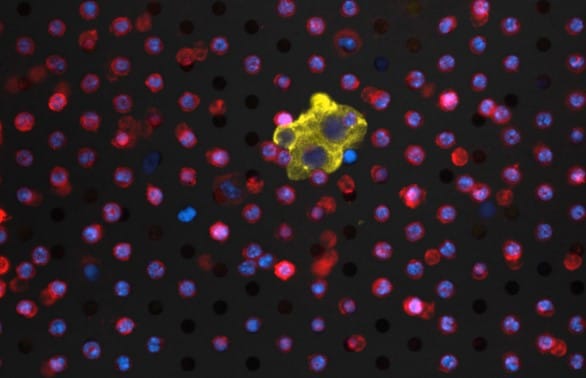